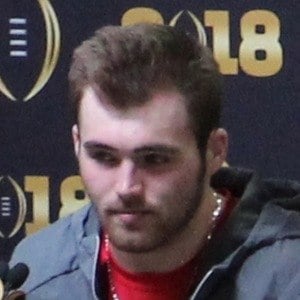 Quarterback who helped the University of Georgia reach the 2017 NCAA Championship game as a true freshman.

With an interest in sports at a young age, he once hit three home runs in the Little League World Series. He then began focusing on football where he played as quarterback at Warner Robins (Georgia) Houston County high school.

Shortly after he enrolled at Georgia University in January, he accepted a Mr. Football Award given by the Atlanta Touchdown Club.

As a pun from his Instagram name JakeFromStateFromm, his mother posted a picture on twitter of a Bulldogs Jersey with his number 11 on the back and the nickname Khaki's printed on the back in replace of his name.

He was teammates with running back Nick Chubb on Georgia during the 2017 season.

Jake Fromm Is A Member Of