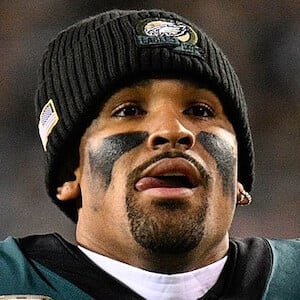 Quarterback for the University of Alabama Crimson Tide who led the Tide to the 2016 National Championship in his freshman year, falling short in the title game to Clemson. The following year, he helped the team capture the title with a win over the University of Georgia. He was a second round pick of the Philadelphia Eagles in the 2020 NFL Draft.

He was coached by his father Averion throughout his career at Channelview High School.

He was born in Houston, Texas to parents Pamela and Averion Hurts. He has a younger sister Kynnedy, and older brother Averion. His brother Averion played quarterback at Texas Southern University.

He played for head coach Nick Saban at Alabama.

Jalen Hurts Is A Member Of