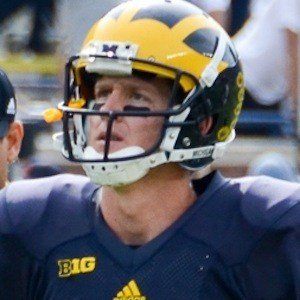 Quarterback who made a name for himself playing with both the Iowa Hawkeyes and the Michigan Wolverines. He was named MVP at the 2016 Citrus Bowl for Michigan and became the first quarterback in Michigan history to throw for at least 250 yards in five consecutive games.

As a senior at St. Thomas Aquinas High School, he led his team to a national championship with a perfect regular season.

He was born to Kathy and Rob Rudock in Weston, Florida.

He was coached by Jim Harbaugh as a member of the Michigan Wolverines.

Jake Rudock Is A Member Of