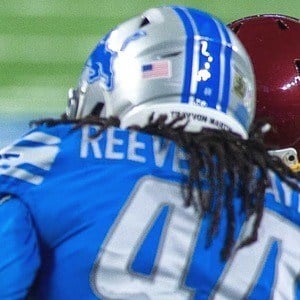 Linebacker who is famous for his time playing in the NFL. He was drafted by the Detroit Lions in the 4th round of the 2017 draft, with whom he would appear throughout the 2017 season.

He was named to Tennessee's all-state team as a high school senior in 2012. He played for four years for the Tennessee Volunteers.

He led the Tennessee Volunteers on defense to victory at the 2016 Outback Bowl over Northwestern.

He and Jarrad Davis debuted for the Detroit Lions as rookie linebackers during the 2017 season.

Jalen Reeves-Maybin Is A Member Of