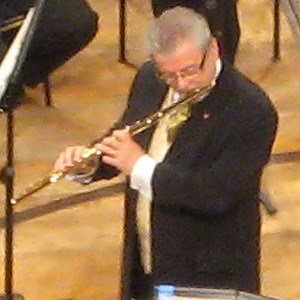 Irish flute player of both classical and popular music who has released more than forty albums since 1979.

After he moved to London as a teenager to pursue a career as a flautist, he studied music at the Paris Conservatoire.

He performed on the Academy Award-winning soundtracks of Peter Jackson's Lord of the Rings film trilogy, composed by Howard Shore.

He married Claire LeBastard, then Annie Renggli on May 2, 1972, and then Jeanne Cinnante Galway on September 9, 1984.

He followed the footsteps of Jean-Pierre Rampal and became one of the first flute players to establish an international career as a soloist.

James Galway Is A Member Of