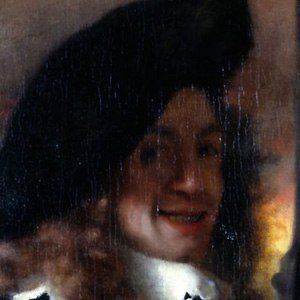 Dutch Golden Age painter known for his images of middle-class domestic life and for his exquisite use of light and color. He fell into obscurity following his death, only to be rediscovered in the 19th century, gaining the reputation for being one of the Dutch Golden Age's greatest painters.

His source of training remained unclear to historians, with some saying he was taught by Carel Fabritius and others claiming Abraham Bloemaert. He emulated the style of the Utrecht Carravagists at times.

His painting Girl with a Pearl Earring, believed to be completed around 1665, is widely considered one of the most important works of the Dutch Golden Age.

He was born in Delft, and his father was a silk worker and art dealer. He had 14 children with his wife, Catharina Bolenes.

A contemporary of the great Rembrandt van Rijn, both Dutch masters have work on display at the Rijksmuseum in Amsterdam.

Johannes Vermeer Is A Member Of