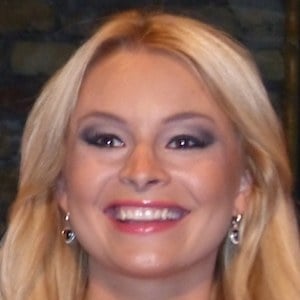 German actress, voice actress, and presenter who is known for hosting the programs SOKO Cologne and Forbidden Love. She is also known for her voice acting work including the German editions of Zoey 101 and Tomb Raider.

Her career in television first began in 1993 when she appeared on the program Happy Holiday. She then went on to star in her first feature film in 1997 entitled Dizzy, Dear Dizzy. Her voice acting work then started in 1999 when she dubbed for Mischa Barton in The Sixth Sense.

She is known for having studied drama at the Prinzregenten theater in Munich.

She was born and raised in Munich, Germany and is known for having dated fellow actor Thore Scholermann.

She has dubbed voices for a variety of actors including Sara Malakul Lane in the 2015 film Cowboys vs. Dinosaurs and Martha MacIsaac in the 2009 version of The Last House on the Left.

Jana Kilka Is A Member Of