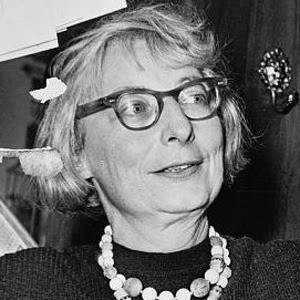 An American-Canadian journalist and author, she is best known for The Death and Life of Great American Cities, a groundbreaking work that criticized urban renewal. She is often regarded as one of the main influences behind the New Urbanist movement.

After graduating from high school in Pennsylvania, she worked as an unpaid assistant editor for the Scranton Tribune. When she first moved to New York City, she worked as a stenographer and a freelance writer before becoming a reporter for the U.S. State Department's publication, Amerika.

She was both an urban-themed author and a political activist.

She married Robert Hyde Jacobs in 1944. An opponent of the Vietnam War, she moved to Canada in the late 1960s and lived in Toronto for the remainder of her life.

Jane Jacobs Is A Member Of