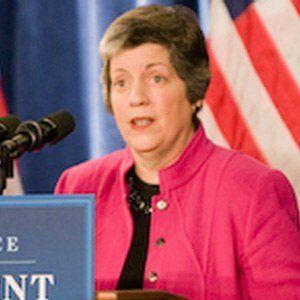 She received her law degree from the University of Virginia School of Law before she was appointed by President Bill Clinton as United States Attorney for the District of Arizona.

She ranked #9 on the Forbes magazine list of most powerful women of 2012.

She was voted Most Likely to Succeed by her high school class and has never been married or had children.

Barack Obama appointed her to the position of guarding the nation's security.

Janet Napolitano Is A Member Of