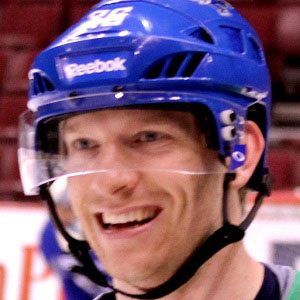 Danish right winger who made his NHL debut with the Vancouver Canucks in 2007 and made a Stanley Cup Final appearance with the team in 2011. He began representing Denmark internationally in 2002 and was chosen to participate in the Winter Olympics and the World Ice Hockey Championships.

He made his professional debut with the Rodovre Mighty Bulls and the Malmo Redhawks at age 16.

During the 2007 Stanley Cup playoffs, he became the first Danish born-and-raised player ever to score a point in the NHL postseason.

He married a woman named Karen and has twin boys named Daniel and Lucas, born in March 2013.

He has been teammates with Danish NHL centre Lars Eller on the Danish national team.

Jannik Hansen Is A Member Of