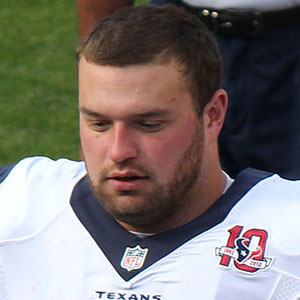 Defensive end from Nebraska who was selected with the 126th overall pick by the Houston Texans in 2012. He recorded 28 tackles during his first two seasons as a backup.

He played both tight end and defensive end at Cozad High School.

He was a First-team All-Big 12 selection during his final two seasons at the University of Nebraska.

He was born to Cindy and David Crick.

He joined quarterback Brandon Weeden as an All-Big 12 selection in 2010.

Jared Crick Is A Member Of