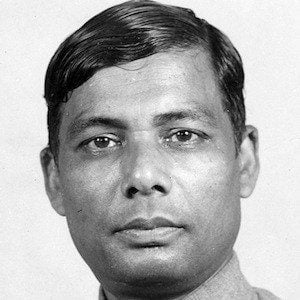 Most Popular#144004
Author Born in Bangladesh#4

Bengali poet, author, songwriter, and folklore enthusiast whose major works include Hashu and Holud Boroni. He earned the nickname of The Rural Poet (Polli Kobi) for his literary emphasis on Bengali folk stories.

He was a graduate of the University of Calcutta. He received his first major literary award -- the Pakistani President's Award for Pride of Performance -- in 1958.

He was the 1976 recipient of the Ekushey Padak award.

He was raised in the Tambulkhana village in the Faridpur District of Bangladesh. He died in Dhaka at the age of seventy-three.

He and Niaz Murshed were both recipients of the prestigious Independence Day Award.

Most Popular#144004
Author Born in Bangladesh#4

Jasimuddin Is A Member Of