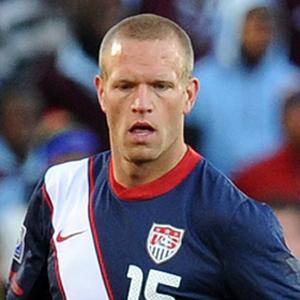 American soccer defender who played for the US national team from 2007 to 2011 and joined the Vancouver Whitecaps FC in 2011.

He played college soccer at the University of Illinois at Chicago from 1998 to 2001.

His life was the subject of the documentary "Rise and Shine: The Jay DeMerit Story," which highlights his rise through the soccer ranks.

He was born to Karen and John DeMerit. He married professional skier Ashleigh McIvor.

He played alongside Landon Donovan on the US national team from 2007 to 2011.

Jay Demerit Is A Member Of