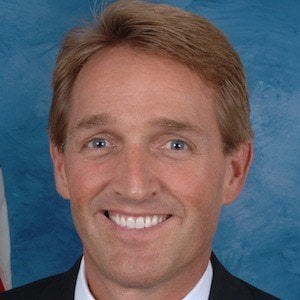 Republican politician who became the junior United States Senator from Arizona in 2013. He previously served in the House of Representatives for 12 years.

He attended Brigham Young University and was a Mormon missionary for The Church of Jesus Christ of Latter-day Saints in South Africa in the early 1980s.

In October 2008, Esquire named him one of the Ten Best Members of Congress and in 2010 and he was one of fifteen Republican House members to vote in favor of repealing the United States military's "Don't Ask, Don't Tell" ban on openly gay service members.

He had five children with his wife Cheryl.

He served in the Senate alongside fellow Arizona Senator John McCain.

Jeff Flake Is A Member Of