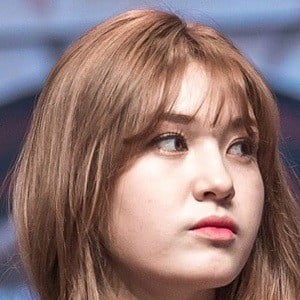 South Korean singer who was chosen to join the girl group I.O.I, which was formed on the reality music show Produce 101. The group's debut single, "Crush," was released in April 2016. Also an actress, she joined the all-female cast of KBS's Sister's Slam Dunk. She is also known by her Korean name Jeon So-mi.

She was signee to JYP Entertainment when she appeared on Produce 101.

She came in first place in the popularity rankings on Produce 101.

Her real name is Ennik Somi Douma. She has a sister named Evelyn.

She appeared in the music video for "Stop Stop It" by Got7, featuring rapper JB.

Somi Is A Member Of