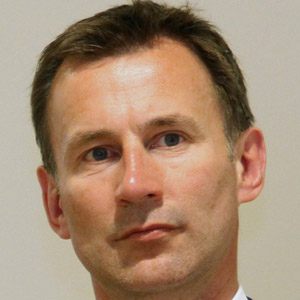 Affiliated with the Conservative Party, this British politician served as a Member of Parliament for the South West Surrey constituency and also held office as Secretary of State for Health and as United Kingdom Culture Secretary.

During his time at Magdalen College, Oxford, he was an active member of the Oxford University Conservative Association. After graduating, he worked as a business consultant and as an English teacher in Japan.

His personal finances were investigated on several occasions, and he was accused of both tax evasion and of using taxpayer funds to allow a political aide to live in his home.

In 2007, Prime Minister David Cameron appointed Hunt to the position of Shadow Secretary of State for Culture, Media and Sport.

Jeremy Hunt Is A Member Of