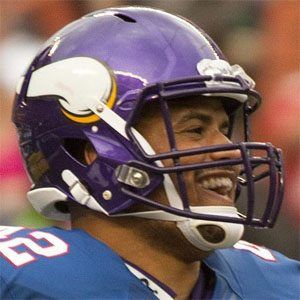 NFL fullback who played for the Lions, Panthers, Colts and Vikings in his first 6 seasons. He earned the distinction of being an All-Pro for the first time in his career in 2012.

He recorded over 300 tackles and ran for over 3000 yards while starting at full back and middle linebacker at Sequoyah High School.

He was a three-time All-SoCon selection at Furman University. He also set the record for scoring at with 414 career points.

He is the son of Sabrina Felton-Curtis and Boyd Curtis. He has three siblings: Maike, Simon and Eamon.

He blocked for Adrian Peterson during the running back's All-Pro, NFL Offesnive Player of the Year 2012 season.

Jerome Felton Is A Member Of