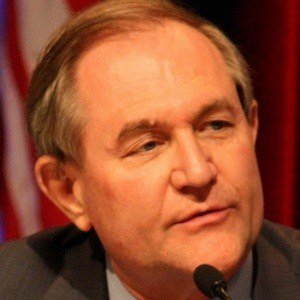 68th Governor of Virginia who announced his candidacy for President of the United States as a member of the Republican party in July of 2015. He suspended his campaign in February 2016.

He was a counterintelligence agent in the United States Army after graduating from the University of Virginia as a Juris Doctor.

Other political positions he has held include 59th Chairman of the Republican National Committee and the 38th Attorney General of Virginia.

He married Roxane Gatling in 1977. He was born to parents Margaret Evelyn and James Stuart Gilmore.

Donald Trump was one of several Presidential candidates he ran against in the Republican party during the 2016 election.

Jim Gilmore Is A Member Of