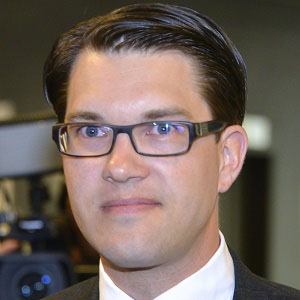 Notable as a member of the Swedish Parliament and the Leader of the Sweden Democrats political party, he is also known for founding a web design company called BMJ Aktiv.

In his early years, he was an active member of the Sweden Democratic Youth Association. At the young age of nineteen, began serving on the Solvesborg city council.

He studied at Lund University in his native Sweden.

In late 2013, he and his fiancee, Louise, welcomed a son named Nils.

He and Nyamko Sabuni are both well known Swedish politicians.

Jimmie Akesson Is A Member Of