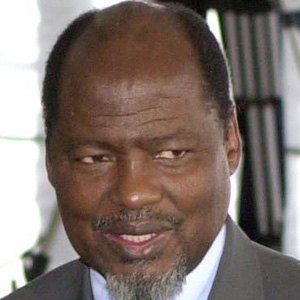 The second President of Mozambique from 1986 to 2005 who helped bring the country into a successful democracy, as well as being a diplomat and elder statesman.

He started studying medicine at the Faculty of Medicine of the University of Lisbon, but moved back to Tanzania because of political issues.

He helped found FRELIMO, as well as helping negotiate the Lusaka Accord of 1974.

He married Marcelina Rafael Chissano, with whom he had four children.

He has been criticized for being friends with Robert Mugabe, a warmonger, racist and homophobe.

Joaquim Chissano Is A Member Of