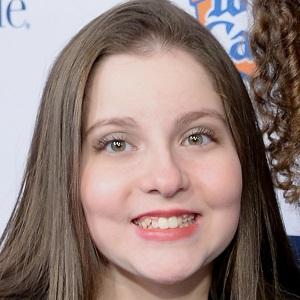 Three-time finalist at the ASCAP Young Composers Awards in 2012, 2013 and 2014. She became nationally known for her duet with Katy Perry on The Night of Too Many Stars at NYC's Beacon Theatre in October of 2012, which earned her features in numerous publications throughout the world.

In 2010 at the age of 9, she wrote and performed a song called "Heroes of Autism" for Toys R Us to be used in conjunction with a fundraiser for Autism Speaks. The campaign raised over $3,000,000.

Her family consists of Tom, her father, Michelle, her mother, and two brothers, Michael and John-Paul. Her aunt Diane DiPiazza was the first bass player for the band The Misfits.

She returned to The Night of Too Many Stars in 2015 and performed alongside Weird Al Yankovic.

Jodi DiPiazza Is A Member Of