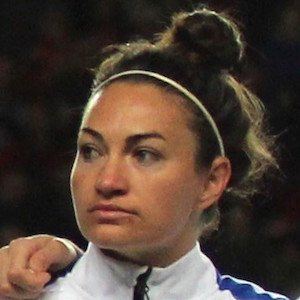 Striker who joined Arsenal L.F.C. in 2016, and the English national team in 2014. She won the Golden Shoe award as top goalscorer at Euro 2017 with five goals.

She was 15 when she debuted with Tranmere Rovers in February 2002.

She scored in Birmingham's penalty shootout win over Chelsea during the 2012 FA Women's Cup Final.

Her parents went to the Professional Footballers' Association awards in 2013.

She and Toni Duggan are both English soccer players.

Jodie Taylor Is A Member Of