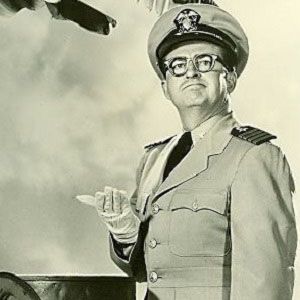 Remembered best for his role as Captain Wallace B. Binghamton in the 1960s ABC series McHale's Navy, this well-known character actor also contributed his voice to several animated Disney films. In addition, he appeared regularly on both The Adventures of Ozzie and Harriet and The Life of Riley.

Before beginning his screen acting career, he attempted to enter Ohio politics -- he ran for a 1950 Republican seat in the state Senate -- and also worked as a theater actor, disc jockey, and ventriloquist.

Tragically, he drowned at the age of forty-nine while relaxing in his personal swimming pool.

A native of Youngstown, Ohio, he later settled in Los Angeles, California with his wife Shirley Haskin Flynn and the couple's two children.

During the 1960s, he briefly appeared alongside Joey Bishop on The Joey Bishop Show. His contract ended after the show's first season, allegedly because he was better-liked by fans than Bishop, who was the star of the series.

Joe Flynn Is A Member Of

Get Even
Born In 1924
TV Actors
First Name Joe