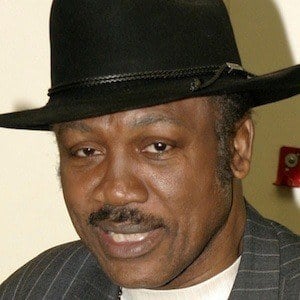 World heavyweight boxing champion known as Smokin' Joe who competed against many of the all-time greats. He won a gold medal at the 1964 Olympics in Tokyo and retired with a record of 32-4-1.

Schoolmates would give him a quarter or a sandwich to walk with them and protect them from bullies.

His 1971 boxing match with Muhammad Ali, the first of three between the fighters, was dubbed The Fight of the Century by the media. Their fight trilogy culminated in 1975's Thrilla in Manila.

His daughter is Jacqui Frazier-Lyde, and he had a son named Marvis.

He lost his undefeated, 29-0 record after falling to George Foreman on January 22, 1973. He then fought Foreman again in 1976, and, after losing again, he announced his retirement from boxing.

Joe Frazier Is A Member Of