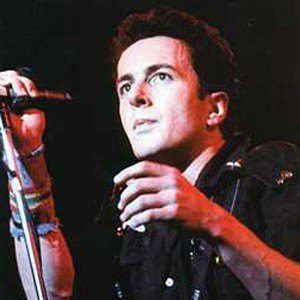 English musician best known as the lead singer and founding member of punk rock band The Clash. With The Clash, he recorded such hits as "London Calling," "Rock the Casbah," and "Train in Vain." He also had a lesser-known side project called The Mescaleros.

He first became a lead singer for the Welsh band The Vultures at age 21.

He was inducted into the Rock and Roll Hall of Fame in 2003.

He had several relationships, including a green card marriage to Pamela Moolman, a South African citizen attempting to obtain British citizenship. He was married to Lucinda Tait from 1995 until his death.

He did a famous cover of Bob Marley's song "Redemption Song."

Joe Strummer Is A Member Of

The Clash
The Pogues
Born In 1952
Punk Singers