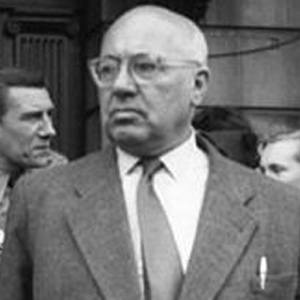 Writer and leader within the Socialist Unity Party, the governing party of East Berlin, during the Cold War. He was known for his expressionist writing style and was a part of the literary avant-garde in Germany.

His early poetry often dealt with his failed suicide attempt and he fled to the Soviet Union in 1935 after the Nazis came to power in Germany.

In 1949, he helped found the Akademie der Künste, is an arts institution in Berlin, and served as its president from 1953 to 1956.

His father, Heinrich Becher, was a judge in Munich.

He won the Stalin Peace Prize in 1952, the year before Pablo Neruda did.

Johannes R. Becher Is A Member Of