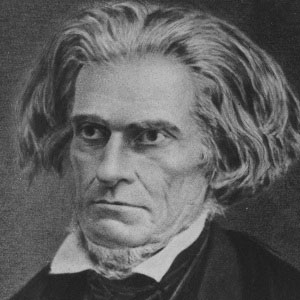 During the early nineteenth century, he served as Vice President of the United States under the presidential administrations of John Quincy Adams and Andrew Jackson. He also served his home state of South Carolina in the United States Senate, and from 1844 to 1845 held the office of U.S. Secretary of State.

Before entering politics as a supporter -- or "War Hawk" -- of the War of 1812, Calhoun graduated from Yale College and went on to attend Connecticut's Tapping Reeve Law School.

In the late 1820s, he allied himself with the South Carolina-based Nullifier Party, which sought to protect states' rights against federal control. Following the 1832 Nullification Crisis, he was forced to resign his vice presidential office.

John C Calhoun Is A Member Of