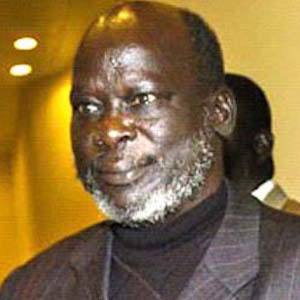 Leader of the Sudan People's Liberal Army who briefly held office as the President of Southern Sudan before dying in a helicopter crash in 2005. He was a powerful leader during the Second Sudanese Civil War, where he fought the Sudanese government from 1983 to 2005.

He began leading rebel forces in attempts to create a New Sudan in 1983.

He served as Vice President of Sudan after the Comprehensive Peace Agreement was signed in 2004.

He was in a long marriage with Rebecca Nyandeng De Mabior.

He was vice president of Sudan under Omar al-Bashir in 2005.

John Garang Is A Member Of