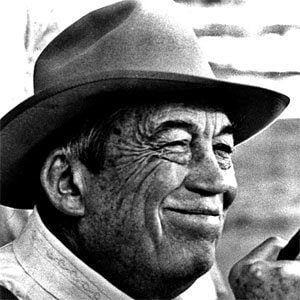 Prominent director of such classic films as The Maltese Falcon, The African Queen, The Treasure of the Sierra Madre, and The Misfits. He also portrayed the character Noah Cross in the 1974 mystery film Chinatown.

He lived in several boarding schools after his parents' divorce.

He wrote many of the films he directed, including the film adaptation of The Red Badge of Courage.

He married his fifth wife Celeste Shane on August 8, 1972. He directed both his father Walter and daughter Anjelica to Oscar wins.

He and Humphrey Bogart were frequent collaborators. Bogart starred in The Maltese Falcon, The Treasure of the Sierra Madre and The African Queen, amongst other Huston films.

John Huston Is A Member Of