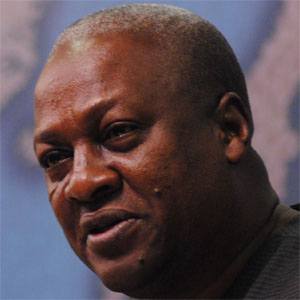 Ghanaian politician who served as a member of the National Democratic Congress and was elected President of Ghana in 2012. He previously served as Vice President from 2009 to 2012.

He attended the University of Ghana, Legon and attained a Bachelor's degree in history and a post-graduate degree in communication studies.

He served as Minister of Communications from 1998 to 2001 and co-founded the Ghana AIDS Commission during his time as Minister.

He married Lordina Mahama, with whom he had seven children.

He, along with Jackson Browne, was a speaker at the TEDx Great Pacific Garbage Patch Conference in 2010.

John Dramani Mahama Is A Member Of