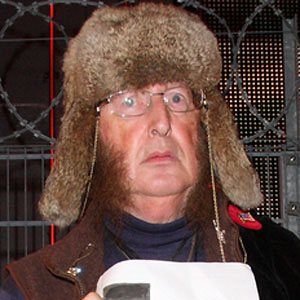 British television personality and sports journalist who specialized in horse racing coverage. He won the British Press Awards twice for his campaigning journalism.

He began his sports journalism career with The Sporting Life, and he later worked for Grandstand on the BBC, as well as for the ITV Sport channel.

He appeared on numerous reality shows, including Celebrity Big Brother, Celebrity Poker Club, and Hell's Kitchen, and he came under fire for his rude and often misogynistic behavior.

He married Jennifer Barnes in 1970. The couple participated in a 2006 episode of the reality series, Wife Swap. He died from lung cancer.

He and actor James Fox attended the Harrow School in London during the same period.

John McCririck Is A Member Of