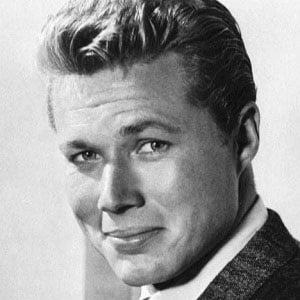 American actor remembered for his roles as Deputy Lane Temple and Slim Sherman on the television westerns Cimarron City and Laramie. Smith is also notable for his role as Milo Buck in the 1954 John Wayne movie The High and the Mighty.

After studying at the University of California, Los Angeles, he made uncredited appearances in the Bing Crosby movie Going My Way and in the James Stewart film Carbine Williams.

During the mid-1950s, he guest starred on the Emmy-winning series Stories of the Century, as well as on the shows Colt .45 and Gunsmoke.

Born Robert Errol Van Orden, he grew up the second child of Margaret and Errol Van Orden. He accidentally shot and killed his older sister, Laura, when he was six years old. He was briefly married to actress Luana Patten, and he had a daughter from another relationship.

He co-starred with Joel McCrea in the 1955 film Wichita.