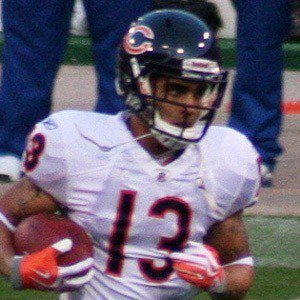 Former NFL wide receiver who was drafted by the Chicago Bears in the 2009 NFL Draft, but was forced to retire after a career-ending back injury in 2011.

He played college football at Abilene Christian University where he began as a backup, but swiftly became a starting wide receiver.

He had his best season in 2009 when he was named to his only Pro Bowl.

He fathered two children with his wife, SanDerriqua.

He played with quarterback Jay Cutler while with the Bears.

Johnny Knox Is A Member Of