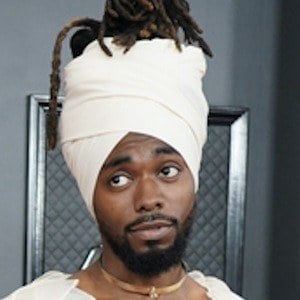 Rapper better known collectively as one-half of the hip-hop duo EarthGang. They gained success from their album, Shallow Graves For Toys, which peaked at #11 on the Billboard Emerging Artists chart.

He met Doctor Dot at Mays High School in 9th grade and they formed EarthGang in 2007.

Their EP Torba features big names such as Mac Miller and OG Maco.

His real name is Olu O. Fann but he goes by the stage name Johnny Venus.

He and Doctor Dot were featuring artists on Mac Miller's GO:OD AM tour.

Johnny Venus Is A Member Of