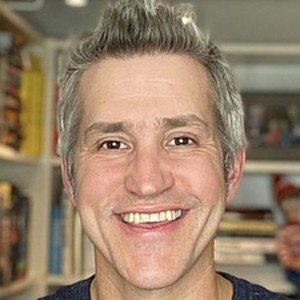 American author who is best recognized for his religiously inspired books. He is known for having published Finish, Do Over, Start, Quitter and Stuff Christians Like which also has an accompanying blog.

He originally gained attention by giving motivational speeches around the country for a wide range of companies including FedEx, Nissan, and Nokia. He then founded the blog Stuff Christians Like which later became a book in 2017.

He is known for having been listed as one of INC's Top 100 Leadership Speakers.

He is married and has two daughters who are often featured on his Instagram.

He shared a photo of his daughter with Millie Bobby Brown and Noah Schnapp through his Instagram in July of 2019.

Jon Acuff Is A Member Of