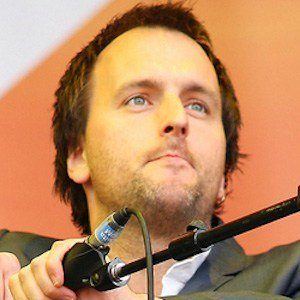 Folk singer and musician best recognized as the lead singer and arranger for the contemporary English folk band Bellowhead. Recognized as a skilled fiddle player, he also makes up one-half of the folk duo Spiers & Bolden and fronts the band The Remnant Kings.

After receiving a bachelor's in medieval studies from Durham University, he earned a master's in composition and musical theater from the London College of Music. He has since written for a number of musicals and worked occasionally with the Royal Shakespeare Company.

In 2010, he launched the project A Folk Song A Day online, releasing a song a day for a year.

His partner Fay Hield, is also a notable folk singer. The pair settled in Sheffield with their two children.

In 2013, he covered Mike Scott's "How Long Will I Love You" and appeared as a busker in the Rachel McAdams and Domhnall Gleeson film About Time.

Jon Boden Is A Member Of