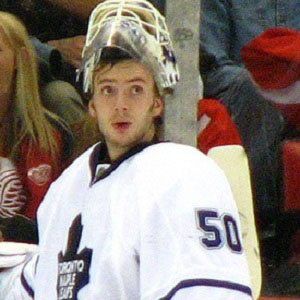 Swedish goaltender best known to NHL fans as a member of the Toronto Maple Leafs and Detroit Red Wings. Prior to his NHL career, he won the 2009 Elitserien Guldpucken Award as the best player in the Swedish Hockey League while playing for Farjestads BK.

He made his professional debut with AIK Hockey in the J20 SuperElit league in 2002.

He was referenced during the seventh season of the USA Network series Psych in an episode titled "Right Turn or Left for Dead."

He married Emelie Witt in March 2013.

He has been teammates with centre Justin Abdelkader in Detroit.

Jonas Gustavsson Is A Member Of