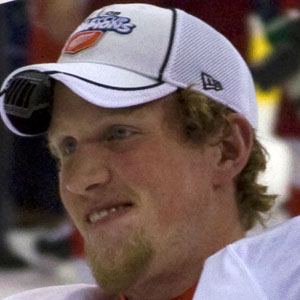 NHL winger known for his toughness and all around hustle. He helped the Detroit Red Wings reach the Stanley Cup Finals in 2008-09, contributing two goals in two consecutive games.

He played college hockey for Michigan State University, scoring the game-winning goal against Boston College at the 2007 NCAA Championship game.

He worked his way up from Detroit's bottom lines in his first years to the team's top lines where he began skating with Pavel Datsyuk and Henrik Zetterberg.

He was born in Muskegon, Michigan.

He was the first rookie to score goals in back to back Stanley Cup Finals games since Dino Ciccarelli in 1981.

Justin Abdelkader Is A Member Of