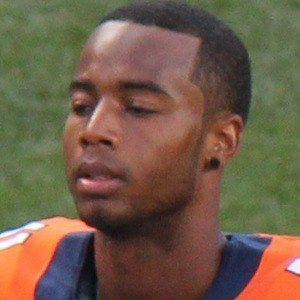 Football wide receiver and punt returner who is known for his time playing in the NFL. In 2016, he won the Super Bowl as a member of the Denver Broncos.

He graduated from Pennsylvania State University with a BA in advertising and public relations in 2008. He played his collegiate football as a wide receiver there between 2005 and 2009. In 2009, he was named as an honorable mention to the All-Big Ten team.

During Super Bowl 50, he set a then-record for the longest punt return in the history of the game with a 61-yard run. He thusly played an integral role in the Broncos' subsequent 24-10 win over the Carolina Panthers.

he has three brothers named Zaccariah, Levi, and Gabe, as well as one sister named Brianna. He is of Black and Filipino descent.

He played alongside Peyton Manning, from whom he caught many passes, during the Denver Broncos' Super Bowl-winning 2015 season.

Jordan Norwood Is A Member Of