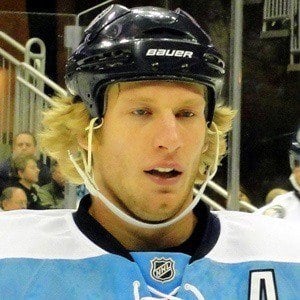 NHL center who was drafted 2nd overall by the Pittsburgh Penguins in 2006. He won a Stanley Cup Championship with the Penguins in 2009 and was a finalist for the Selke Trophy in 2010.

He recorded two goals - both shorthanded - in a single game just weeks after his NHL debut.

His scoring was instrumental to the Penguins' 2008 Stanley Cup run, where they were defeated by the Red Wings, but he also helped the Penguins beat the Wings in the Finals the following year.

His three brothers, Jared, and , all became NHL players as well.

Sidney Crosby, drafted by the Penguins a year ahead of him was his teammate during the team's Stanley Cup runs in 2008 and 2009.

Jordan Staal Is A Member Of