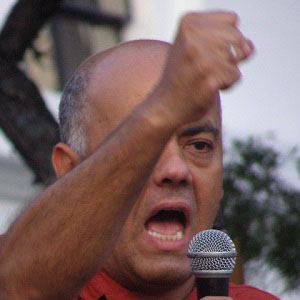 In the first decade of the 21st Century, this United Socialist Party of Venezuela politician served briefly as his country's twenty-second Vice President. After leaving office in 2008, he became Mayor of Venezuela's Libertador Municipality.

He earned degrees in medicine, psychiatry, and psychology from the Central University of Venezuela and the Andres Bello Catholic University.

At the time of his vice presidential appointment, he was serving as head of the Venezuelan National Electoral Council.

He was born and raised in Barquisimeto, Venezuela. His father, a Venezuelan Socialist League leader, was murdered by police.

Jorge Rodríguez Is A Member Of