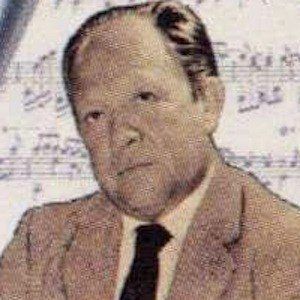 Created the music genre known as Guarania in 1925. His oeuvre also included 12 symphonies and a passel of classical music.

He studied with composer Félix Fernández and the director of the Capital Police marching band Salvador Déntice.

He and poet Manuel Ortiz Guerrero formed a prolific and popular partnership in 1928.

He was born and raised in Asuncion, Paraguay. He helped his family survive by working as a shoeshiner and a paperboy when he was young.

He was a popular artist who managed to create a brand new genre of music, much like Ray Charles.

José Asunción Flores Is A Member Of