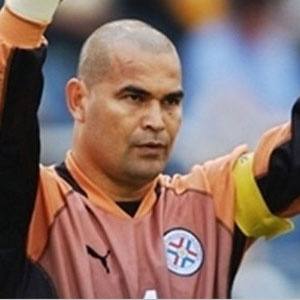 Paraguayan goalkeeper whose long, successful career spanned from 1982 to 2004. He made 74 appearances for the Paraguayan national team and spent the bulk of his club career with San Lorenzo and Velez Sarsfield.

He began his career at 17 with the second-division club Sportivo Luqueno.

He became known for his fiery temper that got him into an on-field brawl with Colombian forward Faustino Aprilla.

He grew up in Luque, Paraguay.

He was named IFFHS World's Best Goalkeeper three times in his career. Iker Casillas won the honor for the fifth time in 2012.

José Luis Chilavert Is A Member Of