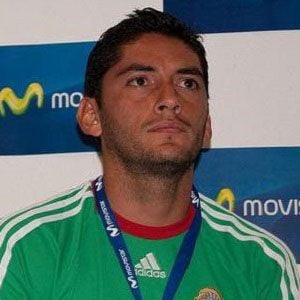 Goaltender who joined Cruz Azul in the Liga MX, later becoming the team captain, after five seasons with Tecos UAG; became a member of the Mexican national team in 2005.

He began his professional career in 2002 with FC Atlas, then went to Tecos UAG where he wowed spectators with his acrobatic defense of the goal.

He captained the Mexican national team that won the gold medal, their first, over Brazil at the 2012 London games.

He has two children, Valentina and Jose, with his wife Melissa Rivas.

Oswaldo Sanchez was another star goalkeeper in the Liga MX.

José de Jesús Corona Is A Member Of