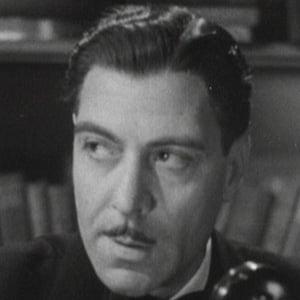 Film and theatrical actor, singer, and writer known for his film roles in Riff Raff and For Whom the Bell Tolls. He appeared in 50 films throughout his career, but he loved stage acting best and was a performer in Grand Hotel, Small Miracle, and other Broadway plays and musicals.

He toured Europe in his late teens as the singer for a harmonica band; later, he moved to the United States.

He won a Critics' Award for his portrayal of Slimane in Algiers, which was directed by John Cromwell.

He was married to Eleonore Vassallo, who died one year short of their fortieth wedding anniversary.

He shared the screen with John Wayne and many other renowned Hollywood actors.

Joseph Calleia Is A Member Of