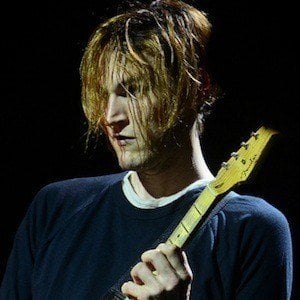 Red Hot Chili Peppers guitarist who was inducted into the Rock and Roll Hall of Fame on April 14, 2012. He also played with bands like Dot Hacker and Warpaint.

He started recording music as a teenager after dropping out of high school at age fifteen. His first band was called The Bicycle Thief.

He joined the Red Hot Chili Peppers in 2007 and played part of the Stadium Arcadium tour. He also formerly toured with Gnarls Barkley from 2006-2008.

He was born to parents Steven and Kathleen Klinghoffer. He had a relationship with P.J. Harvey, which lasted from 2004 to 2005.

At 32, he became the youngest artist ever inducted into the Rock and Roll Hall of Fame, surprassing Stevie Wonder, whom was 38.

Josh Klinghoffer Is A Member Of