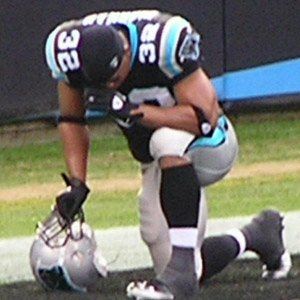 NFL running back played two seasons as a backup for the Panthers before taking on a similar role for the Falcons in 2012. He was a practice team player in until 2010 after going undrafted in 2009.

He was an All-District running back and linebacker at Hermitage High School.

He was a First-team All-CAA selection with nearly 1,900 yards and 20 touchdowns his senior season at the University of Richmond.

He was raised by parents Carl and Colleen Vaughan.

He played behind running back Steven Jackson during his 2013 season with the Atlanta Falcons.

Josh Vaughan Is A Member Of