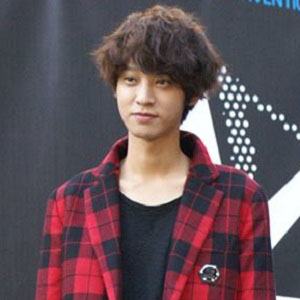 South Korean singer-songwriter who became famous after finishing in the top three of the reality talent competition Superstar K4. Since his appearance on the show, he has released popular singles like "Fantasy" and "Happy Blue Christmas."

He traveled to the Philippines as a missionary and gave taekwondo classes to the local children.

He won awards for Best New Male Solo Artist and Most Popular Karaoke Song of the Year at the Gaon Chart K-Pop Awards in 2013. He was sentenced to six years in prison in November 2019 for his involvement in sharing videos with illicit content, part of what became known as the Burning Sun scandal.

He lived with his mother and brother in England and France during his teenage years.

He co-starred with singer Lee Seung-gi in the romantic comedy Today's Love.

Jung Joon-young Is A Member Of