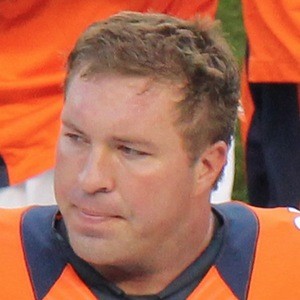 Defensive tackle who earned fame for his career in the NFL. He played for the Denver Broncos and Baltimore Ravens before retiring in 2013 and pursuing tech entrepreneurship as the founder and CEO of Black Lab Sports.

He earned his bachelor's degree from the University of Colorado Boulder in 2001. He was a four-year player there before being drafted in the 5th round of the 2002 NFL Draft.

He earned his entrepreneurship certificate from the Stanford University Graduate School of Business following his NFL retirement. He was featured on the popular CNBC TV series Mad Money in 2007.

His wife's name is Sommer. His mother's name is Marcie.

He played alongside Ray Lewis for the Baltimore Ravens' defense during his 2006-2009 tenure.

Justin Bannan Is A Member Of