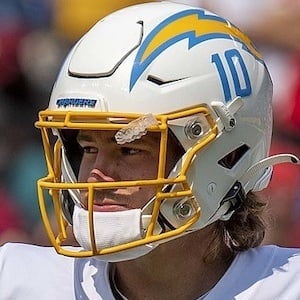 Quarterback who was selected 6th overall in the 2020 NFL Draft by the Los Angeles Chargers after a stellar career at the University of Oregon. He went on to win the 2020 NFL Offensive Rookie of the Year Award after throwing for 4,336 yards and 31 touchdowns during his rookie season.

He was offered scholarships to Northern Arizona and Portland State.

His parents names are Mark Herbert and Holly Herbert.

He was coached by Willie Taggart at the University of Oregon.

Justin Herbert Is A Member Of